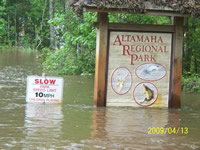 Water rising in the Altamaha River from heavy rains in central and north Georgia in late March, 2009 caused problems for residents, first emergency responders, and County road crews in the northeastern area of Glynn County. The Altamaha rose out of its banks on April 12 causing many roads to be closed through April 14. The major roads included portions of Altamaha Park, Pennick, and Old Jesup Roads. Also many neighborhood and minor collector roads were either inaccessible or dangerous with water flowing over the lower portions. Some of these roadways included Betty Lott Ln., Honey Bee Trail, Bull Island Rd., and other smaller public/private roads in the Everett City area (see photos). By far the worst property impacts were in the County Park at the Altamaha River.

One positive development that has come from this crisis is the efforts of Public Works, Emergency Management Agency (EMA) and the GIS Departments to bring the “out-of-date” conditions and river stage references (datum) at the Altamaha River Park to the attention of the NOAA Hydrological Office for the Southeastern Region in Tallahassee Florida. NOAA employs two types of river gauges throughout the southeast Georgia region. The more sophisticated provides real time readings of river level and predicts future levels at specific dates and times. The other, called a simple hydrograph gauge, only provides the real time river levels but no predictions. The Altamaha River gauge, officially called the “Everett City Gauge”, located at Altamaha Park is the simple hydrograph which provides no prediction capabilities. The gauge can provide river levels however it gave no clear idea of what flood level was considered the flood stage. EMA personnel were trying unsuccessfully to get the weather service to estimate the date and elevation of the flood crest (highest stage) of the flood during April 10 and 11. The Public Works Director at the time, John Carter, was able to perform a statistical regression analysis on the NOAA hydrograph data for the Park gauge and using a mathematical operation called maximization was able to make a rough prediction of the River’s crest at 17.2 feet on Monday, April 13, at 10:45 pm (attached). 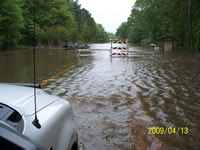 David O’Neal, who was at the time the City of Brunswick EMA Director, sent John Carter’s predictive analysis to the National weather Service (NWS) in Jacksonville for verification on Friday morning. They in turn forwarded it to the Tallahassee Office. Hydrologists and Meteorologists with the NWS in Tallahassee responded quickly with their prediction of the River crest and are currently working with the County GIS Department, to create flood stages and install a more sophisticated gauge with predictive capabilities.


The following Flood Categories are the first result of these preliminary efforts: