Glynn County, on the Atlantic coast south of the Altamaha River, is one of Georgia’s original eight counties. The county was created February 5, 1777 from 423 square miles of land formerly held by Creek Indians. Glynn County is named for John Glynn, a member of the British Parliament and a friend of the colonies who once held the position of Sergeant of London.

Brunswick is the County’s only municipality and serves as the county seat. The City of Brunswick was named in honor of England’s King George III, who was of the House of Brunswick.

Glynn County’s coastal location is a recreational haven for residents and visitors alike. The county features award-winning golf courses, some of the besting fishing on the East Coast, as well as beautiful beaches on the four coastal islands. The five islands of Glynn County, Jekyll Island, St. Simons Island, Sea Island, Little St. Simons Island, and Blythe Island, make up the Golden Isles, so named because of their vast marshes that turn a beautiful golden color in the fall. The islands' beaches, resorts, shops, and historic sites annually attract visitors from around the world. President George W. Bush hosted the G8 Summit in 2004 on Sea Island.

Glynn County is home to many historical sites such as the Hofwyl-Broadfield Plantation. This state-run park is a classic example of a working rice plantation from around 1807.

Fort Frederica, now Fort Frederica National Monument, was the military headquarters of the Province of Georgia during the early colonial period and served as a buffer against the Spanish incursion from Florida. Nearby is the site of the Battle of Gully Hole Creek and Battle of Bloody Marsh, where on July 7, 1742, the British ambushed Spanish troops marching single file through the marsh and routed them from the island, which marked the end of the Spanish efforts to invade Georgia during the War of Jenkins' Ear.

Glynn County’s historic Altamaha Canal was constructed as a transportation canal between the harbor of Brunswick and the Altamaha River 12 miles to the north. Construction began in 1836.

In 1804, a St. Simons Island plantation owner dedicated 4 acres to the federal government for the construction of a lighthouse. The first keeper, James Gould, was appointed by President Madison in 1810. The lighthouse was destroyed during the Civil War so federal forces could not use it as a navigational aid. Then, in 1872, the St. Simons Lighthouse was constructed. The 104-foot tower has a 129-step cast spiral staircase and was designed by one of Georgia’s most noted architects, Charles Cluskey.

Glynn County’s Port of Brunswick forms a vital part of the county’s economy. It is recognized as one of the most productive ports on the East Coast and is the sixth-busiest automobile port in the United States. It is the primary export facility for two of the three United States traditional automotive manufacturers: Ford and General Motors.

The Federal Law Enforcement Training Center (FLETC), a large agency of the United States Department of Homeland Security, is headquartered in Glynco, in Glynn County. FLETC sits on 1,600 acres in Glynn County and serves as an interagency law enforcement training organization for 90 US government federal law enforcement agencies. 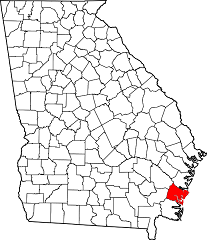